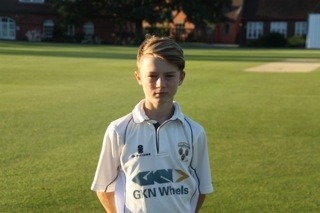 PROMISING Shrewsbury cricketer George Hargrave has been selected by the Midlands for the prestigious Bunbury under-15 Cricket Festival – while the London Road club’s first team target revenge at high flying West Bromwich Dartmouth on Saturday.

Warwickshire Academy prospect Hargrave, who has been in good touch for Shrewsbury’s second team in recent weeks, will take his place alongside the country’s top up and coming young players at Oakham School between July 20-25.

The renowned festival has been a breeding ground for many future stars in the past, among them former England spinner Graeme Swann, who will present the talented local lad with his Bunbury cap later this month.

Hargrave, a Shrewsbury School pupil, is rated highly by Shrewsbury skipper Rob Foster. Not only does he regularly open the batting for Shrewsbury’s second team, he is also a gifted young wicketkeeper.

“He’s a special talent for a young lad,” said Foster. “He’s only 14 and he’s quite small physically but he’s got great technique and concentration. You don’t see too many young lads with the determination to score runs like he has.

“He’s a very good cricketer and it’s good to see him involved at the Bunbury Festival. It will be good experience for him and the club’s delighted for him.”

Foster, meanwhile, will miss Shrewsbury’s Birmingham League trip to joint leaders West Bromwich Dartmouth on Saturday as he is unavailable.

Tom Cox will assume the captaincy in his absence and Foster just hopes the county towners can turn the tables for a heavy opening day defeat at home to West Bromwich when they they were bowled out for just 83.

“We were thrashed at home by them first game of the season,” recalled Foster, ruefully. “It would be good to put in a performance there like we have done in the last few weeks.

“It was embarrassing against them at home so we owe ourselves one to put in a better performance against them. Hopefully we can go there and get the lion’s share of the points.”

Foster added he had every faith in batsman Cox’s ability to lead the side.

“Tom’s done it in my absence before and he’s more than capable,” he said. “He’s a legend in Saracens circles for having won the Cricketer Cup as captain a couple of years ago.”

Shrewsbury have yet to finalise selection with Alex Blofield, Patrick Butler and Mike Barnard all in the frame to replace Foster against a West Bromwich side level on points with Berkswell at the top of the premier division table.

Former Gloucestershire batsman Kadeer Ali is one of several potential danger men, but Foster has urged his side to maintain their revival.

Shrewsbury had much the better of a draw at home to Walmley last Saturday after winning comfortably at Walsall a week earlier.

Those two results have lifted them from second-bottom up into mid-table in seventh spot.