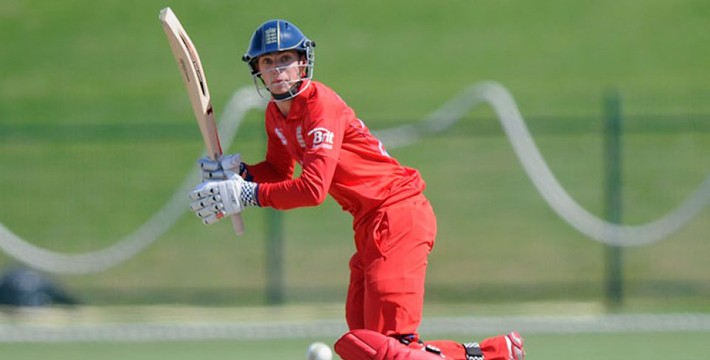 ED BARNARD, the rising Shrewsbury cricket star, has what it takes to make an exciting impact for England at the ICC Under-19 World Cup, says his proud club captain Rob Foster.

All-rounder Barnard, 18, is delighted to have been selected in the England squad for the prestigious tournament in the United Arab Emirates which begins tomorrow.

He is relishing the chance to line up alongside the best young cricketers from around the world.

Barnard will hope to feature in the England side for the opening group game against hosts UAE in Abu Dhabi tomorrow (Friday).

The young Lions then face further group matches in Dubai against Sri Lanka on Sunday and New Zealand next Tuesday.

Foster, who captains Barnard at Birmingham League champions Shrewsbury, said the teenager’s World Cup call was brilliant recognition both for the player and also the London Road club.

Barnard is a popular figure at Shrewsbury where his dad Andy is a former captain and chairman while his older brothers Mike and Steve are current first team regulars.

Foster said: “It’s an amazing opportunity for Ed to be playing in a World Cup and everyone at the club is really pleased for him.
“Jimmy Taylor has a long association with the club but had moved on to play his cricket for Kidderminster by the time he was involved with England under-19s.

“Ed’s grown up at Shrewsbury Cricket Club and it’s fantastic to see him doing so well. This is a great opportunity for him to line up against the best young players in the world.”

Foster stressed he expects Barnard to emerge as a key man for England in the tournament.

He added: “He’s very highly thought of in the England set up having captained the under-19s a couple of times in the Tri-Series against UAE and Pakistan just before Christmas.

“He’s seen as a senior player so I would expect him to play and hopefully he’ll go well.

“I’ll certainly be watching how he does with interest.”

Shrewsbury School pupil Barnard, who used to attend the town’s Meole Brace School,  flew out to Dubai with the England squad at the start of this month.

He is no stranger to the international scene having not looked back since hitting a century on his England under-19 debut against South Africa in Cape Town just over a year ago.

A back injury meant he was ruled out for 12 weeks of the last domestic season but he returned in time to play a couple of games for Shrewsbury in the closing weeks of the campaign.

He also proved his fitness to the England selectors by captaining the under-17s in two one-day internationals against Sri Lanka.
Barnard has been part of the England Development Programme for the last three years and recently signed a new two-year contract with Worcestershire CCC as he eyes a breakthrough to the first class game.