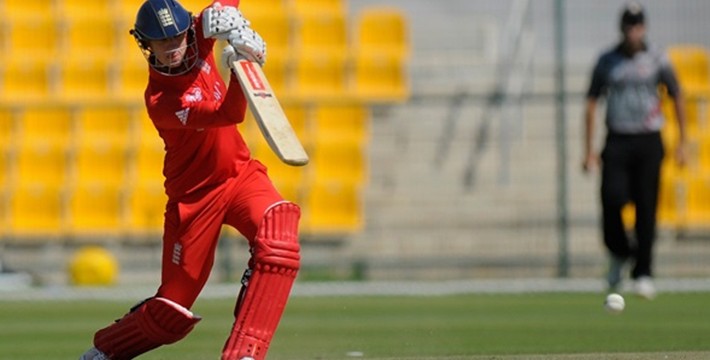 Ed Barnard produced the form which has made him a regular in the England under-19 side as Birmingham League champions Shrewsbury opened the new season with an excellent Graham Williamson Trophy win at West Bromwich Dartmouth.

Barnard, 18, fell just two runs short of a richly deserved century as Shrewsbury, winners of this competition for the last four years, chased impressively to seal a five-wicket verdict with a ball to spare.

Shrewsbury’s reward is a second round tie at home to Knowle & Dorridge at London Road on Saturday.

Barnard looked just like a man who has played regularly over the winter, most notably in the United Arab Emirates where he was ever present for England in the ICC under-19 World Cup as they eventually beat Australia in the third-place play-off match.

He proceeded to put on 130 for the second wicket with stand-in captain Tom Cox, deputising for the unavailable Rob Foster, as Shrewsbury set about their chase with relish.

Cox, promoted to opener as Ed Foster and Steve Leach were also unavailable, played well to make 68 from 89 balls, hitting a six and seven fours.

And he kept the scoreboard ticking over nicely with star turn Barnard who plundered 98 from 110 deliveries, a sparkling knock from the Worcestershire prospect which featured two sixes and eight boundaries.

Alex Blofield (17no) and Elliot Green then held their nerve to see the job through as Shrewsbury timed their chase to perfection.

Cox had earlier allowed West Bromwich Dartmouth to bat first and the hosts rattled up 206-4 from their 40 overs which was built around steady contributions from Brinder Phagura (58), Rawlston Tappin (55) and Ruki de Silva (44).

Spinner Blofield claimed 2-68 while there was also a wicket apiece for new signings Charlie Morris (1-30) and Dewi Jones (1-31) from tighter eight over spells.

Shrewsbury’s strength in depth really shone through as the Foster brothers and Steve Leach were joined on the unavailable list by Steve and Mike Barnard.

Meanwhile, Shrewsbury opener Ed Foster was in brilliant touch as he hit a fine century to help Shropshire claim victory by 35 runs over Staffordshire in last Sunday’s pre-season friendly at Shifnal.

Foster’s first knock of the season could not have gone much better as he made 118 from 137 balls, cracking 13 boundaries and a six.

Other contributions from his Shrewsbury team mates Joe Leach (46) and Rob Foster (29no) plus a quickfire, unbeaten 26 from skipper Richard Oliver down the order pushed the Shropshire total up to 274-6 from 50 overs.

Staffordshire were then restricted to 239-8 as Foster followed up his century by taking two wickets, as did Ben Sanderson and Jack Edwards.

Shropshire play their first competitive match of the season at Shrewsbury’s London Road ground on Sunday, May 4 when Lincolnshire provide the opposition in the first group game of the Unicorns Knockout Trophy.

Several changes ahead of Knowle and Dorridge visit
Scroll to top