NEW signing Dewi Jones goes straight into the Shrewsbury side as the Birmingham Cricket League champions open the new season with a Graham Williamson Trophy first round trip to West Bromwich Dartmouth on Saturday.

“Dewi’s played a lot of games for Glamorgan’s Academy and for Wales in the Minor Counties and has always impressed when we’ve played against him,” said Rob Foster.

“He’s Wrexham-based and was keen to come and play for us. It’s always nice that people want to come and get involved.

“He’s rated very highly at Glamorgan and he fits the mould for us of being a young and keen player.”

Jones is the second close season recruit for Shrewsbury and the other, Charlie Morris, a left-arm spinner from Oswestry, is also in Saturday’s team as Shrewsbury hope to maintain their dominance of the Graham Williamson Trophy having won this competition for the last four years.

Worcestershire all-rounder Joe Leach and Ed Barnard, recently part of the England under-19 team which finished third in the ICC World Cup in the United Arab Emirates, also feature this weekend in a team which will be captained by Tom Cox.

Skipper Foster and his older brother Ed are both unavailable as they are guests at a family wedding while Sam Griffiths is also ruled out through his brother’s wedding.

Steve and Mike Barnard are also missing this weekend, as is opening batsman Steve Leach, earlier this week part of the Oxfordshire University side which took on a Warwickshire team featuring England batsman Jonathan Trott in a rain-ravaged clash at The Parks which ended in a draw.

The free-scoring Leach, who left Worcestershire midway through last summer, made his first class debut the previous week against Nottinghamshire. 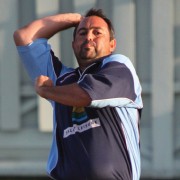