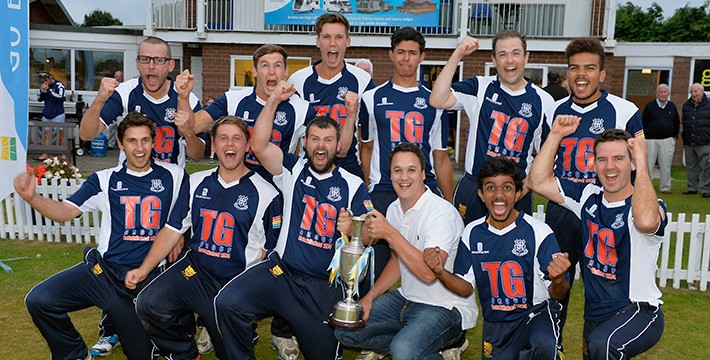 Oswestry caused an upset as they beat hosts and holders Shrewsbury by 16 runs in the final of the Salop Leisure Knockout T20 Trophy tournament.

Because of the threat of rain, the final was reduced from 20 to 15 overs aside and Oswestry, batting first, posted 107 all out in 14.4 overs with Mark Robinson, 19, Alex Huxley, 17, and Vansh Bajaj, 16, the main contributors.

Sam Griffiths took 3-17 and Elliot Green, Henry Blofield and Paddy Butler took two wickets apiece for Shrewsbury who were then restricted to 91-8 in reply as Oswestry opted for a spin attack.

Rather than holding the tournament on a Sunday in August as in previous years, it was spread over three Friday evenings this summer to attract more spectators and avoid fixture congestion towards the end of the season.

As an incentive to attract more spectators, season ticket holders at Shrewsbury Town Football Club, those wearing the club’s football shirt and anyone picking up a flyer at the club’s two pre-season friendlies at the Greenhous Meadow qualified for a free drink courtesy of sponsor Salop Leisure at the tournament.

Scott Higgins, Salop Leisure’s sales and marketing manager, congratulated Oswestry and thanked all four teams for taking part this year. “We were delighted with the number of spectators, including many new faces, who watched the semi finals and final and hope they will continue to support Shropshire cricket clubs for the rest of the season,” said Mr Higgins.

“The change in tournament format was a massive success and we were delighted how well it was received by the teams and spectators alike. We shall now talk to Shrewsbury Cricket Club about the possibility of expanding the tournament to include more teams next season.”