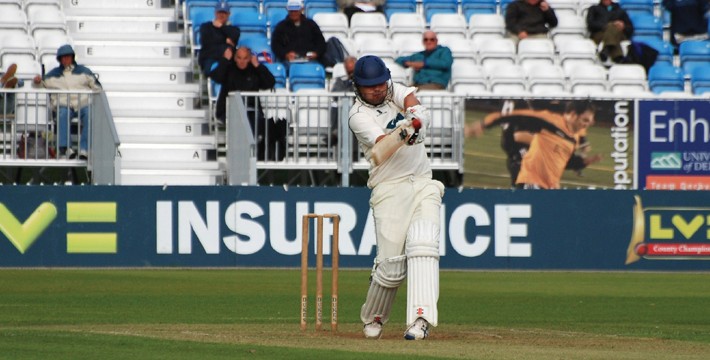 WOMBOURNE felt the full force of a Joe Leach masterclass as he and brother Steve both cracked fine centuries to send Shrewsbury 19 points clear at the top of the Birmingham Cricket League’s premier division.

Allrounder Joe, hoping to become a Worcestershire regular, enhanced his claims with another dazzling display with bat and ball as Shrewsbury romped to a convincing 157 run victory at the top flight’s bottom club.

Leach’s efforts were quickly rewarded as he was handed his Friends Life Twenty20 debut for the Pears the next day as he helped them beat Gloucestershire at New Road.

The runaway win sets Shrewsbury up perfectly for this weekend’s huge double header which sees them face two big games at London Road.

They host second-placed Kidderminster Victoria in the league on Saturday before welcoming Chorley in the last 16 of the ECB National Club Championship 24 hours later.

“Last weekend was probably as good as it gets,” said delighted Shrewsbury captain Rob Foster. “We were very good with the bat and followed it up with the ball.”

Joe hammered a whirlwind 131 and younger brother Steve carried his bat for an unbeaten 108, the siblings putting on 183 for the third wicket.

Skipper Foster also got in on the act with a rapid unbeaten half century, hammering 62 not out from just 30 balls, as Shrewsbury scored freely to rack up an imposing 340-3 from their 55 overs.

It was a stunning response from the London Roaders who were 63-2 at one stage having lost opener Ed Foster for four and Tom Cox for 23.

“Steve anchored the innings which is what we wanted after the last couple of weeks when we’ve lost early wickets,” said captain Foster. “He played very well and batted sensibly.

“That allowed Joe the freedom to come in and bat the way he did. He was outstanding again for us.”

Joe faced 97 balls for his 131, his top score for the club, as he struck five sixes and no fewer than 18 boundaries.

Steve, who also hopes to break through at Worcestershire, compiled his 108 from 151 deliveries, hitting 11 fours and two sixes as he reached three figures for the second time this summer.

Wombourne were then blown away for 183 with ultra consistent spinner Elliot Green taking 4-38 after strong opening spells from Joe Leach (2-23) and Steve Barnard (2-54).

Tom Meek hit a defiant 55 and Worcestershire’s Richard Jones made 31 but the Shrewsbury attack were always in control.

“Having Elliot in the side is great for a captain as he’s always going to take wickets,” said Foster. “Joe and Steve started it off by bowling really well to have them at 31-3.

“It was a very good all round performance.”